For this lesson, I wanted to focus on creating artwork that tells a story. Fourth graders were introduced to collaborative art, and worked together by exchanging postcards between their classes. Using the elements of character, narrative and setting, their goal was to work collaboratively to create both a written and visual story with a beginning, middle and ending. In the past, I found there was a bit more excitement added to this lesson when postcards were exchanged with fourth grade classes at another school - so if any art teachers out there are interested for next time, let me know! 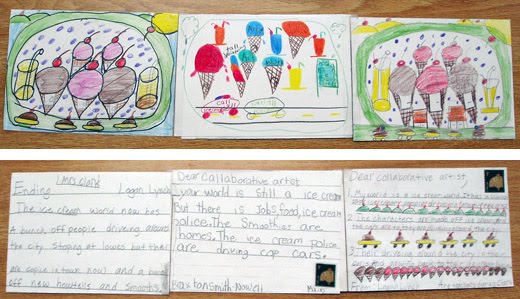 Ending: The ice cream world now has a bunch of people driving around the city stopping at Lowes but there are cops in town now and a bunch of new hotels and smoothies! 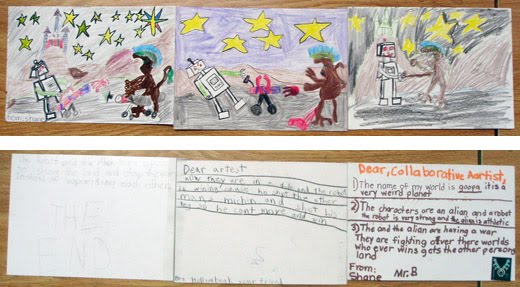 Beginning: Dear Collaborative Artist, The name of my world is Goopa. It is a very weird planet. The characters are an alien and a robot. The robot is very strong and the alien is athletic. The robot and the alien are having a war. They are fighting over their worlds. Whoever wins gets the other person's land.

Middle: Dear Artist, Now they are in a duel and the robot is winning because he shot the other man's machine and shot his leg so he can't move and win.

Ending: The robot and the alien have agreed to share the land and stop the war instead of vaporizing each other. 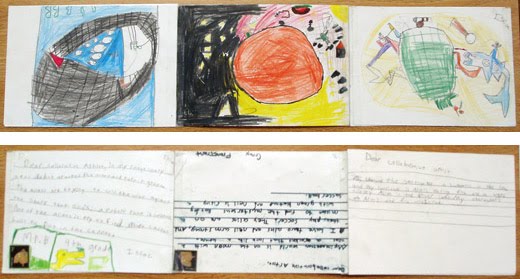 Beginning: Dear Collaborative Artist, My imaginary world is on the moon with two aliens and a rocket that looks like a house. I have two aliens, Neil Armstrong, and they play soccer. The aliens are on a mission to find the mysterious hot dog with green ketchup and Neil is riding a soccer ball.

Middle: Dear Collaborative Artist, I changed the story to a summer in the sea and my narrative is aliens eating fish and a very crazy alien is in the driver seat.

Ending: In my imaginary world, robots attacked the man and turned it green. The aliens are trying to win the war against the shark.

Posted by Jeffrey D. Seaberg at 2:58 PM No comments:

Inspired by National Geographic, third graders created their own explorer magazine and learned about the roles of an illustrator, graphic designer, biologist and author during the process. Students started as "explorers" who had just discovered several new species of animals. For each new discovery, they selected several images from the animal bag to combine in an illustration. Students wrote articles about some of their discoveries, including the new animal's name, environment, diet, etc. Their final task was to design an engaging cover for their magazine that would make someone in a bookstore want to stop and read it. This lesson was definitely a hit. Students had a blast coming up with their new animal combinations and putting everything together for their finished magazines. 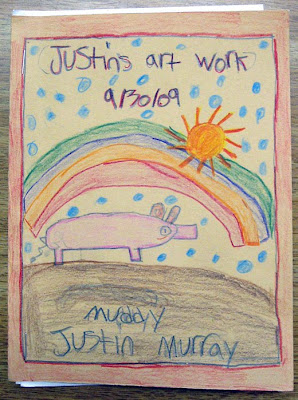 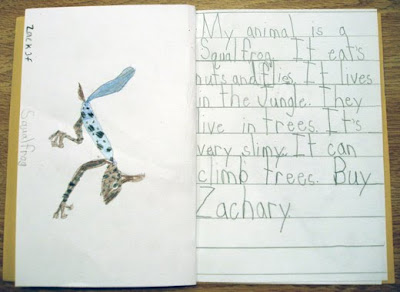 My animal is a Squalfrog. It eats nuts and flies. It lives in the jungle. They live in trees. It's very slimy. It can climb trees. By Zachary 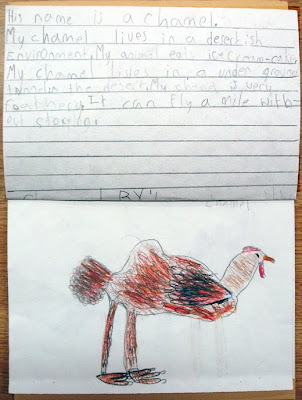 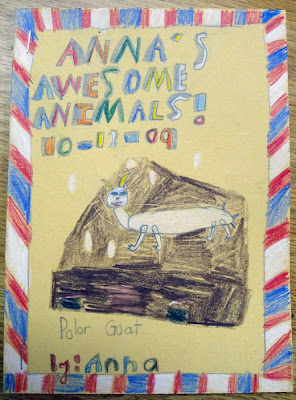 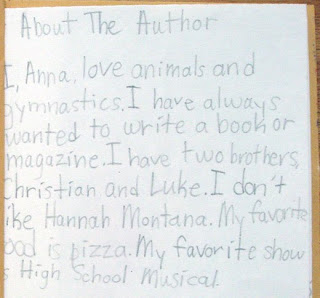 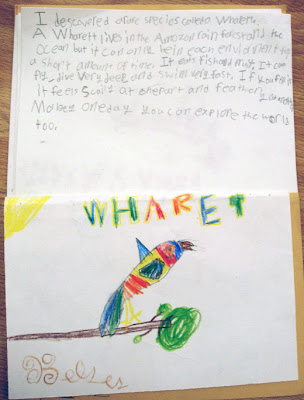 I discovered a rare species called a Wharet. A Wharet lives in the Amazon Rainforest and the ocean but it can only be in each environment for a short amount of time. It eats fish and fruit. It can fly, dive very deep, and swim very fast. If you feel it, it feels scaly at one part and feathery at another. Maybe one day you can explore the world too. 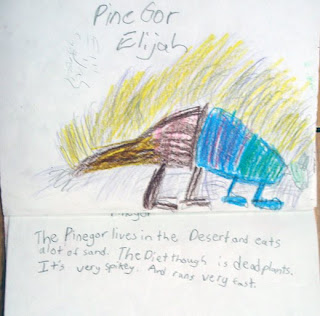 The Pinegor lives in the Desert and eats alot of sand. The diet, though, is dead plants. It's very spikey and runs very fast. 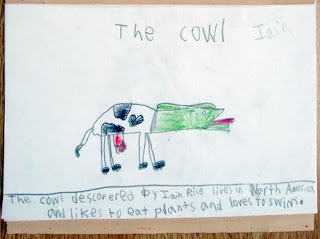 The Cowl, discovered by Iain, lives in North America and likes to eat plants and loves to swim.

Fifth graders started this lesson drawing self portraits with contour lines. For many of them, it was the first time they had drawn a self portrait using a mirror. It took some time to get used to, but I was really impressed with the final drawings. From there, students started working on their collographs and transferred one of their drawings to cardboard. Collagraphy is a type of printmaking in which textured materials are attached to a plate (the cardboard), and is then inked with a roller and used to print. We used hot glue to raise their contour lines and then added textures into the shapes that were created in their portraits. Most classes are currently on the final step of the process - creating a series of monoprints from their plate. I was really excited after seeing the results from the first few classes and couldn't wait to post their work. Enjoy! 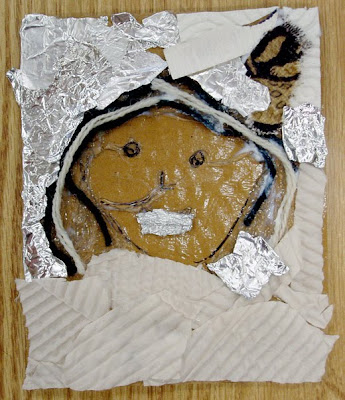 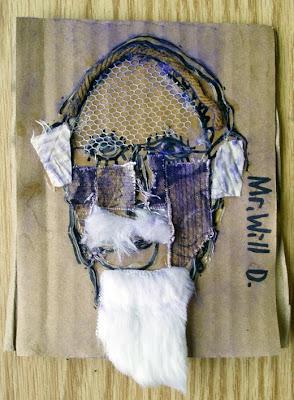 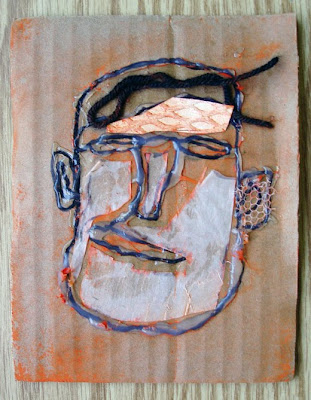 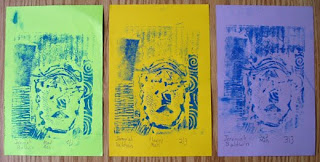 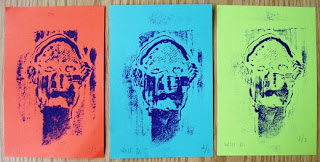 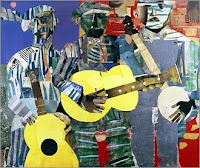 Second graders created a collage of their community to correspond with a unit they were studying in their classrooms on communities. We started by looking at collage artwork by Romare Bearden, an  African American collage artist who was a part of the Harlem Renaissance. For inspiration, we listened to jazz music from this time period while we worked. My main goals were to introduce students to the process of collage and also to primary and secondary colors. Second graders also used paper mache, recycled milk cartons and oil pastels to create a building from their community, mixing their primary colors to create their secondaries. At the end of the lesson, we set all of their buildings up in front of their collages to create a community installation in the classroom! 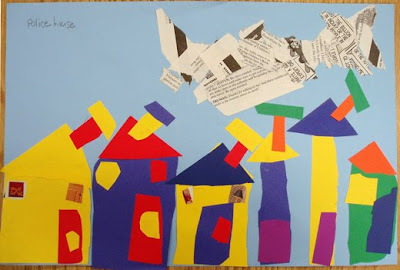 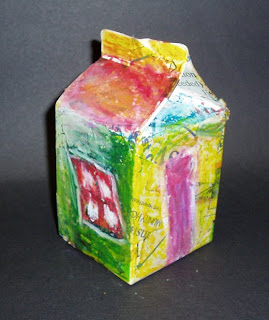 Posted by Jeffrey D. Seaberg at 1:55 PM No comments:

If you could save any of the following materials for our art projects, it would be greatly appreciated!

And if you have any other materials that might be good to use, send an email over and let me know!